Ten Dead Comedians by Fred Van Lente is a fun murder mystery based on Agatha Christie’s most popular book And Then There Were None. According to Christie’s “official” website, And Then There Were None is the best-selling crime book of all time, and it’s no wonder why — it has a fabulous premise: ten strangers are lured to an island mansion where they are mysteriously murdered one by one. Although I can’t see Ten Dead Comedians getting anywhere near that kind of praise or attention, it’s a valiant effort, and an entertaining read at the very least.

We begin by meeting nine different comedians, each at different stages in their career; some are washed up, some are at the height of their fame, and others have a mere one or two shows to their name. But each person is somehow connected to Dustin Walker, the famous comedian who has invited them all to his private island in the Caribbean to discuss a business proposal. Light on details, they all arrive to discover that Walker is nowhere to be found, and his strange little fun-house has more than just creepy clown pictures in store for them.

Van Lente is a funny writer, no doubt about that. He also writes comic books, etc. so he’s used to different genres of literature (and yes, I do consider comics a type of literature). There are a lot of different characters in this book; some I liked more than others, many of them being stereotypes in themselves, although I suspect Van Lente did this on purpose. I wouldn’t consider this book literary, more commercial fiction than anything. It has a wide appeal because it’s a mystery with some fun and gore mixed in, never getting too dark, except maybe towards the end. The methods used to conduct the murders were probably my favorite part about this book because they always came as a surprise — I never knew who was going to die next or who the killer might be. Perhaps if I had read Christie’s book that this was based on, I might have read Van Lente’s version with a more critical eye, but I’m blissfully unaware of lots of things, so I think this made me a more accepting reader.

My main complaint with this book was the pacing; it seemed to surge forward then slow down intermittently, which is extremely frustrating, especially in a murder mystery where the suspense is expected to build slowly and surely throughout. What makes this book unique (and helps explain the ending) is what interrupted the flow of the narrative for me. At the beginning of each section there is a transcript of one of the comedian’s stand-up bits, but sometimes, these sections ran for a few pages, and some of them really weren’t funny. Van Lente does a great job of writing witty, biting dialogue between the comedians themselves, but their stand-up acts were painful to read. Plus, the continuity was a bit off; it felt like threads were picked up and dropped quickly after, leaving me wondering when we were going to revisit so and so, or when we were going to hear about this particular situation again. It all felt a bit random and messy.

I do appreciate the intention behind this book. I just don’t think the execution is as good as it could have been. It was entertaining, and a quick and easy read (most of the time), but I’d like to see this author push a little further with his second novel, perhaps with a stronger edit. 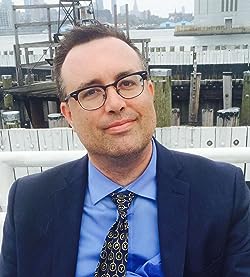 Fred Van Lente was raised by a mystery-loving mother (who preferred Dorothy Sayers to Agatha Christie, but we won’t hold that against her) and a wisecracking Woody Allen-lookalike scientist father in what appears to be some kind of genetic experiment to write his first novel, TEN DEAD COMEDIANS, even though neither parent nor the son himself would know it for many years.

Review by Anne Logan of I’ve Read This: Looking For Something Good To Read? | The Black Lion is a humble interdisciplinary journal that values your voice. For contribution opportunities, visit the Opportunities page; to learn more about submitting to the journal’s creative magazine, visit the The Wire’s Dream Magazine: Submit. | Copyright Policy