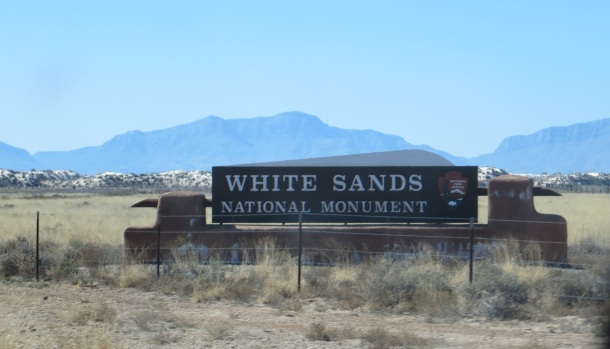 Situated in south central New Mexico is the White Sands Missile Range. The site for the base came not long after the Trinity testing of the first atomic weapons. The desolate area covered in clean silica dust runs for over 100 miles south of the volcanic remnants of the Valley of Fire.

Kathy and I had visited the Valley of Fire several years prior to our volunteer commitment at Bosque del Apache. One Friday afternoon after Thanksgiving, we drove from the Ruidoso area just to see what we could see. This was a lovely family trip from Texas with Kathy’s mom, Evelyn and Sandy, a dear family friend. We borrowed a friend’s cabin for the holiday and would be borrowing it again sometime during this adventure in New Mexico. Thanks again for the great memories, Colleen and Jerry!

The Valley of Fire is a wonderful black lava flow frozen in time. Trails go through the black rock, allowing you to feel like you might be swallowed up by it. On this trip, the valley was a welcomed restroom break for our day trip. We’d planned the trip pretty much as soon as we got to BdA because Joy discovered a blue sliding saucer in the lounge area of free stuff. She latched on to it and waited for the appointed time and day.

We decided on a day trip because other volunteers had made it a day trip instead of camping so we knew it could be done. Our friends Mary and Faye volunteered to walk Keila so she could stay home and remain comfortable so this would be the first time traveling with Frances as a solo dog. We knew it would not be the last. Keila’s old muscles and bones were tired and her hips hurt when she climbed the stairs into and out of the RV. We had to pick her up to put her in the Jeep and the bumpy ride was never something she enjoyed. Frances is portable as a nine pound dog and she loves the adventure of travel although she prefers to ride in a lap rather than the back seat area. 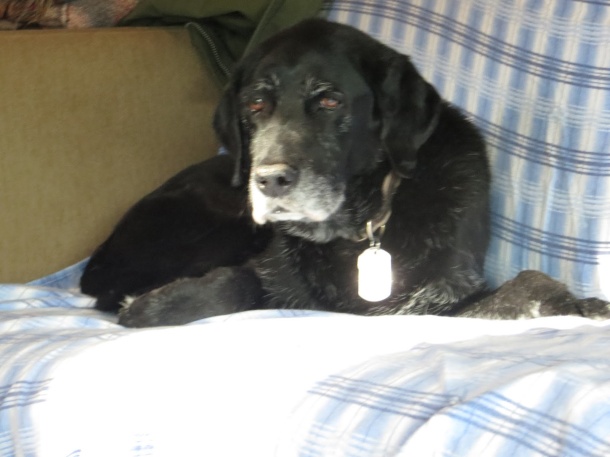 We arrived at the dunes and took turns peeking in the visitor center as one of had to stay outside with the dog. The visitor center had warnings about people getting lost in the desert just a few miles from major roads. Often people don’t realize how dehydration sets in so quickly because the temperatures don’t seem all that severe. Unfortunately, we just read a few weeks ago about a couple who died hiking in the dunes because they simply weren’t prepared. Luckily, their son survived but what an awful tragedy it was.

The center also had interesting information about the flora and fauna in the area that had mutated to adapt to the beautiful white sand. One type of lizard had muted pigment so that it match the lighter color sand while just a few miles away a genetically similar lizard was darker in color.

We drove into the park and sure enough the white dunes of sand glistened like snow. We passed ten or eleven other vehicles and saw families and teens enjoying sliding down the hills of sand. We found a secluded inlet and parked near a picnic table. There was an abandoned sliding disk near it. It had a crack but Joy figured she’d give it a try. We waxed the little saucers, thanks to our friends Mary and Fay who gave us wax after their trip to the park previously. We climbed the hill with our disks and Frances. Kathy went first with Frances in her lap and slid down. I followed. The yellow saucer’s crack was troublesome as it caught the sand and stopped forward momentum. We had to go back and share the blue disk. A few more climbs and slides and we were nearly exhausted. We had forgotten how much exercise you get sledding – you know, what comes down must first go up! 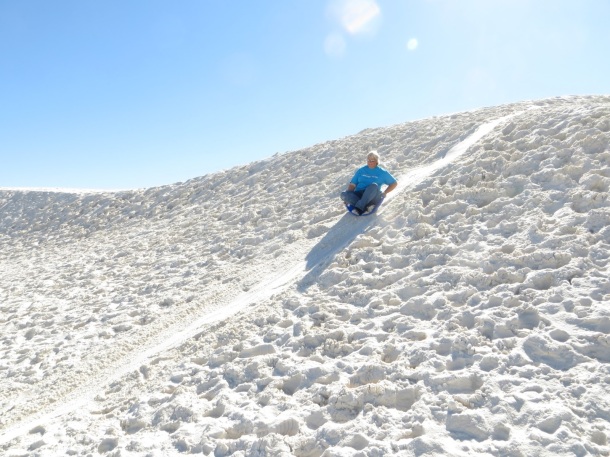 We sat at the picnic table for a few minutes and watched a young family who parked near us. Their young children squealed with delight! Although our trip was short we had a long drive back. Our friends who had made it a day trip had more modern cars then our four cylinder Jeep and could cover more roadway faster than we can.

On our way back to the refuge, we stopped at a local rock vendor who sells the only known samples of Trinitite. He obtained them from a man who literally went out to the Trinity site a few weeks after the testing until they closed the area. The man picked up pieces of rock and sand that had melted and fused together with other materials in the area of the blast. He named these chunks Trinitite after the site. He later died of cancer from his repeated exposure. The store is located just over a hill from the Trinity Site and we wondered how much radiation still remained in the area.

The store had all kinds of geological samples including fossils. I did not purchase a piece of Trinitite as it was priced higher than gold per ounce but I got to see and touch it. So far – no indications of radiation exposure. Ha ha

As we drove home we stopped to watch a spectacular blood moon rise over the lava beds of Valley of Fire. The desert I all her glory is such a wondrous sight and so far we were really enjoying living in it.

Article and Images by J.L. Wright of Newbie Fulltime RVers | The Black Lion is a humble interdisciplinary journal that values your voice. For contribution opportunities, visit the Opportunities page; to learn more about submitting to the journal’s creative magazine, visit the The Wire’s Dream Magazine: Submit. | Copyright Policy