How To Build A Girl by Caitlin Moran was published in 2014, so I’m not quite sure why it’s taken me so long to read it — particularly as I was such a fan of How To Be a Woman.

Anyhow, a week away from the norm was the perfect opportunity to delve into this. Teenage Johanna Corrigan lives with her mixed-up working class family in Wolverhampton. Together, they survive on benefits and their wits. Her mum has just had twins and is suffering from post-natal depression.

“Just now we don’t have a mother, just a space where one once was”

Her wonderfully named younger brother Lupin adores her and her older brother Krissi despairs of her — despite being her most favourite person in the world. At the helm of this crazy family, steering them all through the choppy waters of life is her irrepressible Dadda — a one time musician who suffers with back pain, hates Maggie Thatcher, and lives much of his life in an alcohol-induced haze of self-belief. In her desperation to escape, Johanna creates a new persona, aka Dolly Wilde. As Dolly, she finds herself a job as a music journalist. At the age of 17, she moves to London where she conscientiously dedicates herself to pursuing men, losing her virginity, becoming a wordsmith, and writing ever-more vitriolic reviews of bands. She is self-deprecating and at times self-destructive.

If you have read Caitlin Moran before, you will know what I mean when I say this is very “Caitlin Moran”. This book brilliantly captures teenage awkwardness and embarrassment, and it has made me squirm as I relived some awful teenage girl moments that composed of raging hormones and out-of-control emotions.

Dolly’s relationship with the musician John Kite, a real-life Pete Doherty character, is deep, all-consuming, and like no other she has ever had. It’s characteristic of the exhausting intensity of those developing teenage years; and yet, it was beautiful too. The understanding they share and their questionable belief in their infallible ways made me smile sagely — in a boring adult way. Coupled with this, though, came an unexpected wisp of nostalgia for those years when responsibility was just a word and staying up talking all night was the norm. Dolly reminded me about the importance music when growing up. The teenage relationship with music is vital. Music forms the soundtrack to those formative years when feelings and experiences are heightened and raw.

There is both cringe-worthiness and humourous aspects aplenty within this book — and I did lots of both. Perhaps the best example of this is Dolly’s first eye-watering encounter with cystitis.

“I think of pictures I have seen, in history books of castles at siege. That’s how it feels up there, now. Like something is attacking me from within and the defences are failing, fast. Scared peasants tipping boiling oil over the ramparts. Livestock panicking. Horses rearing up and neighing. Princesses hastily trying to leave via a secret back way – their tall pointy hats jamming in my urethra. Lots of screaming”

I don’t think I’ve ever come across a better description of the misery that is cystitis! I have heard Caitlin Moran talk about cystitis before and it’s obviously a subject dear to her heart.

Moran has a beguiling way with words. She writes feelings and emotions which burrow under the skin and lodges inside heads. For Dolly’s job as a music journalist, she is flown to Ireland. She has never flown before….

“The windows go pale and grey – we’ve flown into the clouds. Rainclouds are dirty and wet – looking out of the window at them makes you feel you have temporarily gone blind. The inside of a rain cloud is like a bubble of night. And then the plane pulls up higher – the clouds ripping across its nose – and we suddenly burst out into bright, bright brilliant sunshine…….Sitting in seat 14A, in the sun, I float on a full-moon tidal joy unlike anything I have ever experienced. I am getting incredibly high on a single, astounding fact: that it’s always sunny above the clouds. Always…….I feel like I’ve just flown 600mph head-on into the most beautiful metaphor of my life: if you fly high enough, if you get above the clouds, it’s never ending summer. I resolve that, for the rest of my life, at least once a day, I will remember this. I think it’s the most cheering thought I’ve ever had”

It’s always sunny above the clouds. I adore this. It has stayed with me.

Although, I didn’t enjoy How To Build a Girl as much as How To Be a Woman, but I did enjoy it. If you’re thinking of giving it a go yourself… be warned. This book contains a lot of sex. So; if you are of a delicate disposition, this may not be for you! 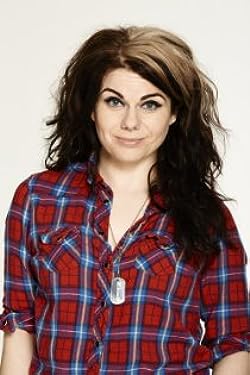 Caitlin Moran had literally no friends in 1990, and so had plenty of time to write her first novel, The Chronicles of Narmo, at the age of fifteen. At sixteen she joined music weekly, Melody Maker, and at eighteen hosted the pop show Naked City. Following this precocious start she then put in eighteen solid years as a columnist on the Times—both as a television critic and also in the most-read part of the paper, the satirical celebrity column “Celebrity Watch”—winning the British Press Awards’ Columnist of The Year award in 2010 and Critic and Interviewer of the Year in 2011.

Author Website | Author Bio | Buy How To Build A Girl

Review by Angela Vincent Of Changing Pages | The Black Lion is a humble interdisciplinary journal that values your voice. Visit the submissions page to learn more about submitting to the Journal’s sections or to The Wire’s Dream Magazine. | Copyright Policy