This was my final read of 2016 and it was a good one to finish the year on. When Mr Dog Bites is the story of 16 year old Dylan Mint. Dylan Mint lives with his mum, his Dad is “away” at the war, and he attends a special school. His best friend is called Amir and Dylan has Tourettes.

For Dylan, life is a continuous battle as he deals with the swearing, the tics, the uncontrolled movements, and overall trying to keep the dog at bay. The Dog emerges when Dylan gets overly fraught or stressed — which makes the dog howl and bark. In addition to this, Dylan has discovered (SPOILER!) that he is going to die in March. In response to this discovery, he comes up with his “things to do before I cack it list.” The three things on his list are:

1) Get dad back from the war
2) Have sexual intercourse with a girl, preferably Michelle Malloy
3) Protect Amir and find him a new best bud.

As you might imagine, achieving these is not a straight forward process.

This is written in Dylan’s voice and his voice is funny, warm, and unique, which makes his internal thought process to life on the page. His odd phrases and dialogue often made me laugh out loud; and I was often moved by his day to day struggles.

“Marvin Gayes ‘let’s get it on is on pause and ready to spring into action. I’d put a twenty watt light bulb in my bedside lamp – twenty’s plenty and all that. And I have two boxes of Pringles a box of Maltese’s and a bottle of Irn-bru on the sideboard for mega munchies and debrief afterwards”

Although Dylan was my favorite character, Amir and Dylan’s Mum rivaled for second place. Dylan’s Mum is clearly overworked and stressed as she struggles to make ends meet. Despite this, she is strong and kind. Although her frequent exasperation with Dylan the love and affection between them is clear, there is no doubt she would fight tooth and nail to protect him.

The relationship between Dylan and Amir is the one that made me laugh the most. I have no idea how teenage boys communicate — but I suspect that some of the puerile humor played out between them is pretty accurate. And I suspect this is so because Brian Conaghan is a teacher and also has Tourettes Syndrome himself.

When Mr Dog Bites is authentic, believable, heartwarming, and funny; it had me rooting for the central character. Overall, it was an excellent way to conclude my reading year. 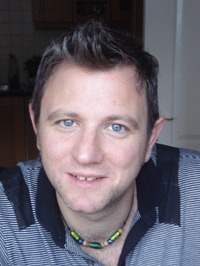 Brian Conaghan was born in 1971. He was raised in the Scottish town of Coatbridge but now lives and works as a teacher in Dublin. He is the author of The Boy Who Made It Rain and has a Master of Letters in Creative Writing from the University of Glasgow. Over the years Brian has made his dosh as a painter and decorator, a barman, a DJ, an actor, a teacher and now a writer. He currently lives in Dublin with two beauties who hinder his writing: his wife Orla and daughter Rosie.

His novel When Mr Dog Bites has been shortlisted for both the 2015 Carnegie Medal and the Children’s Book Award Ireland.

Review & Image by Angela Vincent of Changing Pages. © 2017 Black Lion Journal. Want to see your work here? Visit the Submissions page to learn more about submitting to the Journal’s sections or to The Wire’s Dream.