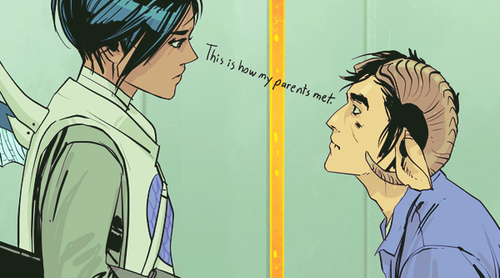 One of the best things about Saga is the dynamic relationships. Saga is frequently introducing us to new partnerships, families and friendships. In this volume we finally discover how Alana and Marko meet. A prisoner and a guard, both agree that the war between their people needs to stop. Despite outside pressures to hate each, other they fall in love. In an act of passion, Alana frees Marko when she finds out that he’s going to be transferred. In doing, she is branded a traitor.

When Saga Volume 2 begins, we find ourselves in the past reliving Marko’s first memory. By the time of his birth, the war was no longer fought on Wreath; but Marko’s parents were determined to show him what happened. Using blood magic, Marko’s parents were able to show him the final battle that took place on Wreath. Cut to present day, Marko’s parents have found and boarded the tree ship only to discover that their son is married to Alana, an enemy Landfallian, and has a baby daughter. There is no time for discussion as Marko races to save Izabel, their specter baby sitter who had just been on the receiving of a banishing spell.

Saga also shows us a new partnership between The Will and Gwendolyn. The Will agrees to return to work if Gwendolyn will help him rescue a slave girl from Sextillion. Gwendolyn is driven to bring her ex Marko to justice while The Will is eager to put his pain behind him.

I’m continually amazed by the writing of Brian K. Vaughan and Fiona Staples. Saga has become my favorite comic and I haven’t even read the entire series. It’s beautiful, emotional, dramatic, and imaginative with just a splash of sexuality. And those are just the sprinkles on top. But we need to admit to ourselves that the best part about Saga is Lying Cat, obviously. Let’s just say that I hope the Vaughan/Staples duo lasts for a long time!

Review by Rachel McGill of Lvl41Rogue: Comic Reviews & News. © 2017 Black Lion Journal. Want to see your work here? Visit the Submissions page to learn more about submitting to the Journal’s sections or to The Wire’s Dream.