Archives / Christina Lydia / Politics / Pt. 6
Thanksgiving. A day of thanks. How do we say what we’re thankful for, especially after going through this political turmoil, this overwhelming election? 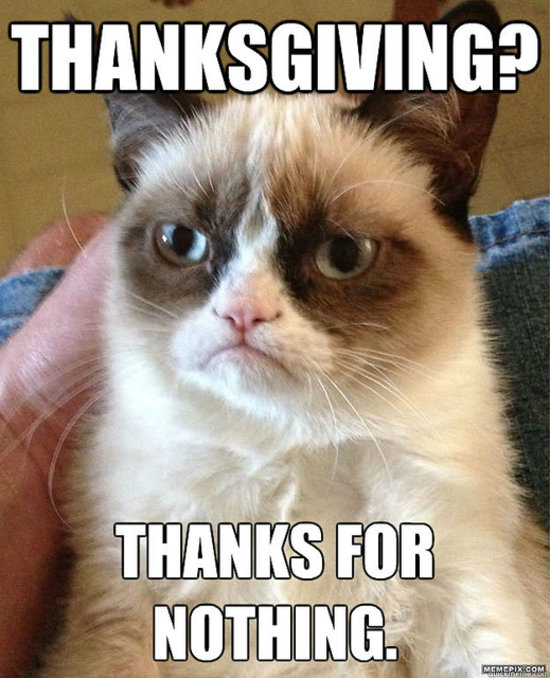 The one and only Grumpy cat. Image found on Popsugar

The only hope I have at the moment is from John Olivier — yes, the comedian — who dedicated a Last Week Tonight show on the past election. Oliver spoke much about the election and gave his opinions on what he believes will be in danger under the new presidency. Before he ended his show with a a fiery display of 2016 (and a glorious FU to 2016), he urged his viewers to support organizations that will be in jeopardy. This is no light matter — Oliver speaks truth. Under the new presidency, we don’t know what will happen to these organizations that serve so many individuals. But what we do know is that the red party has been itching to make change — change that will dramatically effect these organizations if implemented.

Oliver encouraged what the Boston Globe has dubbed “rage donation” and many are all for it. The idea is to support organizations in threat of defunding by donating to them. Oliver also encouraged individuals to support news outlets that have worked to de-funk the fake news that easily spread throughout the campaign. Here’s a list from The Huffington Post:

National Resource Defense Council for global warming and the environment.

NAACP Legal Defense and Education Fund for upholding civil rights and The Trevor Project for supporting our LGBTQIA family and friends.

The New York Times, The Washington Post, and ProPublica to support journalism and political accountability.

On a last note, Oliver talked about those relatives that some of you must encounter — he was talking about those who voted red. His advice? Donate to the charities aforementioned in their honor. Not only is this a BRILLIANT idea, it serves to help these organizations prepare for what will be an uphill battle.

If you haven’t already, do yourself a favor and watch Oliver’s show. It’s inspiring, heartfelt, truthful, and easily found on Youtube so there’s no excuse (unless you don’t have internet access, then I apologize sincerely for assuming so). To take the load off of what must be an estranged holiday for some, I’ve posted the video in its entirety for you, courtesy of John Oliver’s Youtube account.

¡PSST! © 2016 The Black Lion Journal. Last Week Tonight With John Oliver Youtube video courtesy of John Oliver’s Youtube account. Visit The Submissions page to learn about submitting to individual sections or to The Wire’s Dream. P.S. Use the social media links below to share with others.