Those out-of-sync with the hip-hop music scene may be unfamiliar with Beyoncé Knowles-Carter’s Lemonade album, released on April 2016. Beyoncé, a household name in the liking of Madonna (for the use of a single name), is an artist familiar with feminist values and ideals. Her mother, Tina Knowles, is a known spokesperson for gender equality and has influenced Beyoncé on that topic. In a post about sameness in literature, Lunch Ticket’s “Now More Than Ever” essay touches on cultural appropriation and on the strong history of colonialism — a topic that Lemonade the visual album also speaks on.

Beyoncé’s feminism is one that critics say is muddled within capitalistic appeals. Bell Hooks, a well-known author, feminist, and social activist, says that Lemonade is “the business of capitalist money making at its best.” The critique, however, is not on Beyoncé the person but on Beyoncé the brand. Though, at times, inseparable, Beyoncé’s self-named brand gains critical attention from both sides of the feminist debate. On the one side, Beyoncé is a powerhouse feminist who uses the black woman’s state of being as her idol, often making known the issues that follow systemic racism and upholding values that make women powerful. On the other side, Beyoncé’s feminism is capitalistic in nature and/or untrustworthy. Her untrustworthiness is, on its own platform, a topic for further debate. Yet, to touch on a person’s trustworthiness, or their legitimate reasons for doing what they do, is to touch on a person’s honesty and their value to that honesty. Capitalism, and the means to capitalistic gains, can appear as legitimately dishonest and untrustworthy. There is always a “big” versus “little” narrative with capitalism, in the sense that the bigger oppresses the smaller — which is the only way to remain on top — and that wealth will trickle down to the bottom.

There is no doubt that Beyoncé the person believes she is a feminist. Her music and her visual narrative speaks about women’s issues and of racism. She is best known as the businesswoman who is also a mother and a woman. Her body is the idealized version of a goddess, and her business sense is idolized as a role model for women who know that they can have “both” (career and family). Yet, her untrustworthiness stems from her motives and intentions that are viewed as contradictory. Is she untrustworthy because she is a business person, a woman, and a person of color? Would people admire her and her form of feminism, as they do Lena Dunham, if she were lighter complexion? Or a white feminist? 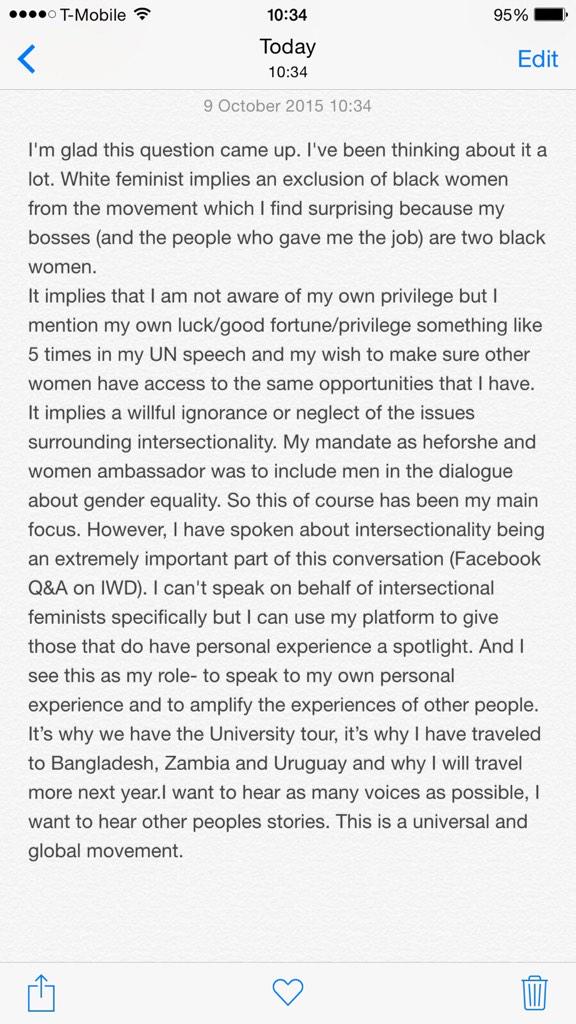 Throughout history, white feminism first showed its color during the suffrage movement. Suffragettes like Elizabeth Cady Stanton and Susan B. Anthony worked to ratify the 19th amendment of the US Constitution, which prohibited the denial of one’s right to vote based on one’s gender. Their concerns and the ratification of the 19th amendment did not apply to black women. White feminism implies a “willful ignorance of intersectionality” and the issues that plague women with a different worldview and life perspective. It is an emphasis on one type of woman — that of, mainly, middle-class white heterosexual suburban woman, possibly wife, mother, and potentially a working class or higher individual — and the issues that concern that group. It assumes that the issues of that group are “normal” or “standard” issues that collectively affect all women. Of course, this type of feminist mindset is one that all — men and women — must work to overcome. UN Women Global Goodwill Ambassador, Emma Watson was asked whether her stance on feminism is that of white feminism. Her efforts for the HeForShe movement show that her intentions for feminism move beyond the color white and include other voices from around the world. She says that “I can’t speak on behalf of intersectional feminists specifically but I can use my platform to give those that do have personal experience a spotlight. And I see this as my role- to speak to my own personal experience and to amplify the experiences of other people.”

When Beyoncé’s feminism is criticized, are we viewing it through the lens of white feminism? Or is there something else that must be discovered?

Bell Hooks’s response to Lemonade is her essay “Moving Beyond Pain.” She brings up a few issues for discussion: the first is the commodity of the black experience; the second is the commercialization of the female as object. 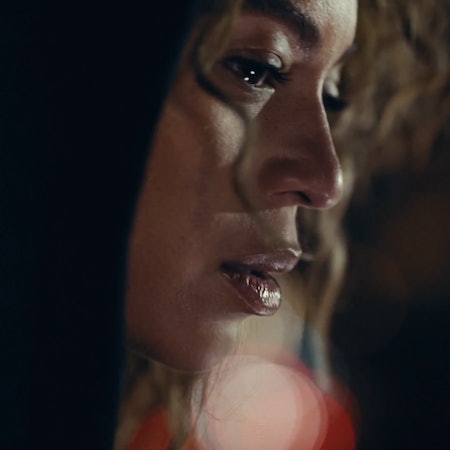 Commodity of the Black Experience

“What makes this commodification different in Lemonade is intent; its purpose is to seduce, celebrate, and delight—to challenge the ongoing present day devaluation and dehumanization of the black female body.”

Hooks writes that despite Lemonade’s visually stunning narrative, it still remains within a stereotypical framework that reiterates, or repeats, conventional constructions of the black female body and emotional experience. Conventional constructions are frameworks that uphold an ideal version, or caricature, of a person and/or group. In Lemonade, Hooks stresses that the black female body is still portrayed as the victim — a victim who has undergone emotional pain, betrayal, and trauma, by the hands of a male. In this sense, victimizing women, especially the black female, plays to the idea of power — a patriarchal power structure, in which the woman is a victim because she has been affected by the power of the male figure (note: victimization here is in response to a heterosexual relationship and is viewed within that lens).

Lemonade shows that an appropriate response, a powerful one, is that of violence. Here, violence is the all powerful solution that has been eroticized and sexualized with a goddess-like appeal. Hooks critiques Beyoncé’s response to the victimization: “She dons a magnificently designed golden yellow gown, boldly struts through the street with baseball bat in hand, randomly smashing cars. In this scene, the goddess-like character of Beyoncé is sexualized along with her acts of emotional violence, like Wagner’s “Ride of the Valkyries” she destroys with no shame.”

Regardless of its superficial appeal, violence in any shape or form is not a positive way to regain and show dominance and is a controversial act to uphold. The celebration of violence and rage is one that Hooks says is a problematic feature in Lemonade: “Contrary to misguided notions of gender equality, women do not and will not seize power and create self-love and self-esteem through violent acts. Female violence is no more liberatory than male violence.”

Hooks closes on this point: “No matter how hard women in relationships with patriarchal men work for change, forgive, and reconcile, men must do the work of inner and outer transformation if emotional violence against black females is to end. We see no hint of this in Lemonade.”

The Commercialization of the Female as Object

“Throughout Lemonade the black female body is utterly-aestheticized—its beauty a powerful in your face confrontation. This is no new offering.”

Viewers are presented with an idealized fantasy narrative that uses real-life experience, romanticized violence, and an eroticized female body. Ideals of exoticism are ever present; and the appeals of violent power contrasted with colonialism are formalities mixed within traditional hierarchical constructs. 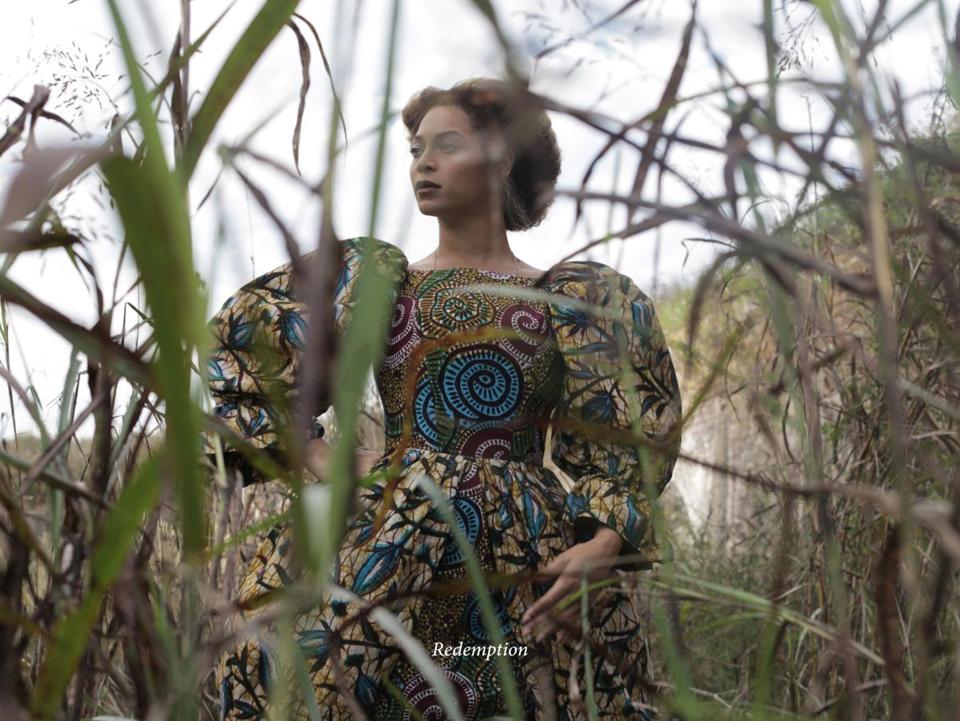 “Commodities, irrespective of their subject matter, are made, produced, and marketed to entice any and all consumers. Beyoncé’s audience is the world and that world of business and money-making has no color.”

Beyoncé’s use of antebellum dress and the aesthetics of sportswear suggests that she is using her platform to market her brand and, coincidentally, her upcoming line of sportswear:

“Despite all the glamorous showcasing of Deep South antebellum fashion, when the show begins Beyoncé as star appears in sporty casual clothing, the controversial hoodie. Concurrently, the scantily-clothed dancing image of athlete Serena Williams also evokes sportswear. (Speaking of commodification, in the real life frame Beyoncé’s new line of sportswear, Ivy Park, is in the process of being marketed right now).”

It is important, before making generalizations, to realize that Beyoncé the artist and Beyoncé the person are supposed to be two separate beings. Hooks does a fine job in critiquing Lemonade as a piece of art and examining Beyoncé’s motives as the actress within the visual narrative. Her actions in real life, however, do seem to contradict those examined by Hooks in Lemonade. Hooks warns that despite Beyoncé’s claim for being a feminist, her art should not be trusted as such.

“Her vision of feminism does not call for an end to patriarchal domination. It’s all about insisting on equal rights for men and women. In the world of fantasy feminism, there are no class, sex, and race hierarchies that breakdown simplified categories of women and men, no call to challenge and change systems of domination, no emphasis on intersectionality. In such a simplified worldview, women gaining the freedom to be like men can be seen as powerful. But it is a false construction of power as so many men, especially black men, do not possess actual power.”

One thought on “Bell Hooks’s Response: What Makes Beyoncé’s Lemonade A Strong Topic For This Generation’s Feminists?”