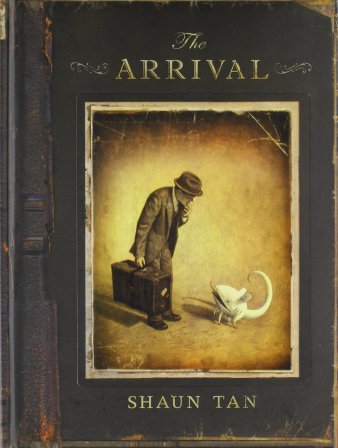 One of my favorite books of all time has to be Shaun Tan’s The Arrival. It is one of those rare items that captures my attention every time it comes within my grasp–it is a sublime piece of artwork and illustration. To say it is one of my favorite books may be puzzling to some as the book has no words whatsoever–and it is over 180 pages long . I have a beautiful brown hardback edition which always sits proudly on my desktop. Unfortunately, the book can be its own worst enemy, since it is unique and hard to define. It doesn’t fall into any category and therefore slips under the radar of most readers. It could be best defined as a graphic novel or perhaps a wordless picture book. Because of this, the vast majority of people disregard it as a children’s book or just another book to add to a comic book geek’s collection. To cast this book aside is a grave injustice to Tan’s work. It is one of the most complex books one could read and requires greater contemplation and effort to enjoy than the conventional book.

Tan has written a great many books which all warrant time to dissect, The Red Tree in particular is a book which is particularly fascinating. His skill and artwork is a joy to behold, his greatest being his use of shading and body language. The Arrival is a ponderous read. The protagonist is a man who embarks on a journey to start a new life in a strange and distant city. Tan uses the character to interact with a strange and alien city which is reminiscent, at times, of New York, in my opinion.

Some of the facial expressions used in the book are near perfection. It is a testament to his ability as an illustrator to convey such emotions as terror, hatred, confusion and hope of a migrant without the use of a single word. The surroundings, symbols and objects illustrated in the book are completely alien to us and this adds to our empathy with the character–it puts us firmly in his shoes. Tan himself said this was one of his main aims in going for a wordless book: “the absence of any written description also plants the reader more firmly in the shoes of an immigrant character. There is no guidance as to how the images might be interpreted, and we must ourselves search for meaning and seek familiarity in a world where such things are either scarce or concealed. Words have a remarkable magnetic pull on our attention, and how we interpret attendant images: in their absence, an image can often have more conceptual space around it, and invite a more lingering attention from a reader who might otherwise reach for the nearest convenient caption, and let that rule their imagination.” (www.shauntan.net/books/the-arrival)

My most cherished aspect of The Arrival is the scene where the protagonist meets various characters in his quest to find food and work in the new city. He meets three different characters who, like the main character, have escaped horrific conditions of cruelty. He conveys this through expert shading and facial expression. One of my favorite images has to be the image below depicting the persecution one man suffered at the hands of injustice.

Many will dismiss The Arrival as a coffee table book or something a child will enjoy–but I urge anyone who sees it in a shop or library to bring it home to read and absorb. It is not a book that can be read in one sitting or indeed a book that can be appreciated after reading it once. I have read it countless times and I still keep picking it up to find new interpretations and to find hidden symbols and shapes within the intricate artwork.

Shaun Tan was born in 1974 and grew up in the northern suburbs of Perth, Western Australia. In school he became known as the ‘good drawer’ which partly compensated for always being the shortest kid in every class. He graduated from the University of WA in 1995 with joint honours in Fine Arts and English Literature, and currently works full time as a freelance artist and author in Melbourne. | Author’s Really Creative Website